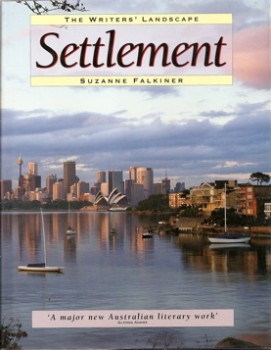 ‘It is so inexpressibly lovely that it makes a man ask himself whether it would not be worth his while to move his household goods to the eastern coast of Australia, in order than he might look at it as long as he can look at anything.’

‘HERE, IN THIS COUNTRY, we have no Roman ruins on every green hill; no crumbling viaducts or spires, no castles or keeps to remind us of ages and lifetimes gone. In this country, if we would turn back to look for our past—whether it be personal or collective—we must search among the absences, the seemingly bright and airy spaces, wherein dance the illusive dust motes of memory.’

Though the first, and relatively late, European settlement in Australia quite quickly superseded its original purpose—a gaol—for various reasons it spawned other factors of social attraction, and, like grains of sand trickling to the bottom of an hourglass, a flow of people from mainly the Northern Hemisphere continued to stream to the southern continent and continued the creation of a new urban, technological and industrial civilisation. The majority of these people settled in the cities, and lived in a way that was in total opposition to that of the country’s earlier inhabitants. Australia is one of only a few such countries where two such contrasting societies—a modern urban technological society, and its ancient predecessor, a non-agricultural subsistence existence—have been so starkly and recently juxtaposed.

Thus, one people was nomadic; the other sedentary. One scattered itself sparsely all over the inhabitable parts of the continent in strict clan and territorial groups; the other clustered for the most part in continuously expanding urban settlements near the coast. One lived by hunting and gathering; the other by transforming raw resources in agriculture and manufacture. One lived almost completely within the parameters of the existing natural landscape; the other lived almost completely in a built or modified environment. One celebrated the landscape as the natural order, and saw itself as a part of its cycles; the other glorified the domination of humankind over nature, setting out to change and modify the landscape from the moment of arrival.

Today, seven major metropoles and a number of secondary ones litter the map. The more fertile and productive areas are covered by the net of agriculture, pastoralism and mining, while the previous fragile social order—where existence was physically precarious and depended on rigid adherence to a social system evolved to fit a difficult environment—is irrevocably disrupted. To what result?

One thing that is obvious from the literary evidence that has accumulated in the past 200 years since the second major wave of settlers arrived, is that the ancient social dichotomy, literary and otherwise, of ‘the city or the bush’ is still largely in force. The Australian cities have developed their separate characters according to the geographical and social factors that formed them, and the writers who have documented their growth have moved through a diverse process of alienation and nationalism to a close sense of identity with their own territory, and a celebration of their regional virtues. However, there has also been demonstrated a distinct lack of equilibrium between the built environment and the natural landscape in the areas where the two intersected, with the area of intersection often depicted as a zone of destruction. Now, as in other parts of the world, the Australian cities are also beginning to show signs of exhausting their own infrastructures and the natural resources on which they rely for their continuation. Perhaps this literary unease can and should be read as a metaphor or symptom of a deeper malaise in Australian society: a continuing lack of harmony, a lack of maturity in the relationship in the relationship between humankind and the natural world on which it depends.

Perhaps in the coming century, as well as continuing the celebration of what we have become, and in a society still young and small enough to be able to observe clearly the lessons to be learnt from the juxtaposition of the old and the new, we will modify our own directions accordingly, so that settlement and wilderness, mutually dependent as they now irrevocably are, might reach a yet reach a more harmonious existence.