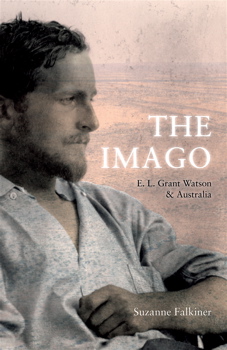 ‘So it was that day after day, the bush questioned me….the veil of time seemed drawn aside, and eternity gaped in the sun’s glare, or in the cracking of a seed pod.’

In 1910 Elliot Lovegood Grant Watson, a twenty-four-year-old Cambridge biology student steeped in the Darwinism, atheism and socialism fashionable among his contemporaries, joined Daisy Bates and the controversial young anthropologist A. R. Brown on an ethnological expedition into the Western Australian desert. From Perth his travels took him inland to the Kalgoorlie and Murchison river regions, and then back to the coast and the Aboriginal island lock hospitals of Shark Bay. The experience changed his life. Twice now in little more than a year he had fallen in love, once with a woman and once with the Australian landscape. Both would remain intangible and ineluctable, and both obsessions would stay with him for the rest of his life. On his return to England he decided to become a writer.

Back in Europe, moving restlessly between the English countryside and the expatriate colonies of pre-war Florence and Paris; from Bohemian London and prohibition New York to Palestine and the Arctic Circle, E. L. Grant Watson navigated friendships with Joseph Conrad, Rupert Brooke, Mabel Dodge Luhan, Gertrude Stein, Havelock Ellis, D. H. Lawrence and—later—Carl Gustav Jung. Through two World Wars and the writing of his six ‘Australian’ novels, he continued to bring the cultural preoccupations of his generation to bear on the subject of the numinous Australian inland, trying to reconcile his Darwinian scientific training with a yearning for spiritual meaning. Running thorough all his novels was the subtext of his secret, lifelong love for a woman, extraordinary in herself, whom he could not marry.

‘It reads like a novel with extraordinary events and people in it.’

‘Suzanne Falkiner’s biography of little-read English novelist Elliot Lovegood Grant Watson…is comprehensive and beautifully written, but perhaps its most compelling feature is the solid case it builds for his enduring claim on our attention.’

‘English biologist, writer and eccentric, E.L. Grant Watson’s name hovers on the edge of our history. …Fragile, shy, passionate but thwarted, he emerges from Suzanne Falkiner’s intelligent and readable biography in a series of incarnations – among them a boy with a pet gibbon, a man in love with a traumatised married woman, an entomologist who finances his expedition to Australia by catching fleas for the Rothschilds. …This impressively researched biography, like Grant Watson’s life, travels through different worlds, touching them lightly.’

—Barbara Brooks, ‘UTS in Print’, U Magazine of the University of Technology, Sydney, 3 May 2011

‘Many familiar names are scattered through his story. The book is an amateur psychologist’s paradise. It may be because of his six Australian novels that grant Watson’s name survives but his life was as strange as his fiction.’

‘..a rich, engaging and rewarding biography…’

‘Elliot Lovegood Grant Watson…is surely the only person to have gone on anthropological expeditions with Daisy Bates AND to have hung out with Gertrude Stein.’
—James Ley, ‘Books of the Year’, ABR AUSTRALIAN BOOK REVIEW,
December 2011 – January 2012

The Imago is an entertaining story of a restless, tortured character who prefers to wander the world alone. Yet despite appearing to be a shy and morose young man, Grant Watson is invited to accompany Alfred Reginald Brown and Daisy Bates on expeditions to Bernier and Dorre Islands, and mixes with luminaries such as Gertrude Stein, Joseph Conrad, and in later life, Karl Jung…. Overall, The Imago is an ambitious autobiography that more than repays the reader for their time…. Falkiner’s research is exhaustive and her admiration for her subject apparent, but she maintains a sensitive touch, allowing readers to reach their own conclusions….The Imago is an engaging read…

Suzanne Falkiner’s biography of this strange, absorbing and very European man gives us a better understanding of his myriad intellectual, scientific and spiritual interests. She offers a useful guide in an addendum to the novels and short stories and her own research and that of others is well documented. But her greatest service has been in unraveling his complicated life and personal travels. With many of Grant Watson’s wrtings still unpublished and other valuable works out of print, this book will do much to stimulate interest in and help to order and place this remarkable and individual man who was an outsider to the mainstream in more ways than one.

‘Suzanne Falkiner works through contradictory evidence with great judiciousness in a biography that is characterised by rigorous research, pellucid prose, and sympathy for a contradictory and complex character.’

Peter Grant Watson’s daily routine now began with an early morning dip in the sea. The small reef sharks, well-fed on numerous shoals of fish, left them alone: they were easily frightened off if you splashed with the palm of the hand, according to Dr Steel, although they sometimes carried a harpoon or tomahawk while swimming. After breakfast came several hours of ethnological work, followed by another sea-bathe, and then a meal at midday cooked by Louis Olsen, mainly of fish he had caught on the turn of the tide the previous day. In the afternoons they worked again.

Brown had arranged for the male inmates to be brought to him one by one under the canvas shelter, where he assigned them numbers and began compiling a list of their ‘European’ names—Dick, Jimmy, Nobby, Tiny, Shank, Possum etc—along with their tribal names, ages and district. Brown and Grant Watson then ‘interrogated’ their subjects intensively, using the painstaking method evolved by W. H. R. Rivers at Cambridge. Sitting down individually with each informant, they asked a string of questions to establish family details—who was your mother? who will your brother marry? what do you call your mother’s brother?—until a mathematical pattern (later dubbed by Malinowski a ‘kinship algebra’) emerged that could either be matched with a previously-discovered type or classified as a new discovery. Evenings were spent in conversation, or relaxing on the sand dunes overlooking the sea.

Peter was in his element. On the island’s outer edge, where the long Indian Ocean rollers washed endlessly onto a submerged coral shelf at the foot of the low cliffs, the receding tide uncovered aquarium-like pools filled with vivid new sea life. On the eastern, or inner, side, where the waves broke gently on little sheltered beaches and shallow bays, tiger sharks basked in the sunlit water and dugongs grazed on seagrass. The island’s wallabies—which Peter believed had adapted to drinking seawater—were so fearless that they explored their tents at night, scampering and playing under the camp beds, while giant turtles lumbered inland onto the moonlit sandy wastes to bury their eggs. Peter, when not assisting Brown, spent his time in nothing but a pith helmet and a towel around his waist, exploring and collecting specimens and spearing fish. Even at noon, when the temperature reached 115 under their shade cloth, the sea breeze made the heat quite bearable. This zephyr, freshening at sunrise before sinking to a dead calm at evening, also blew away the flies.

But if Peter was able to observe a great deal about the wildlife on Bernier Island, he learned relatively little about Brown, who—while talkative on other matters—was reticent about himself. Rex had stayed behind in England to be married, Peter knew, but Brown never spoke of his wife, and in the months they were together he wrote to her only twice, and then only on half a sheet of paper. When knew each other a little better, however, Brown spoke of a ‘Russian princess’ he had been engaged to as an undergraduate at Cambridge. (This was probably Sasha Kropotkin, daughter of Russian nobleman and anarchist Petr Kropotkin: Brown had a taste for distinguished connections, observers noticed.) Like Rex, she had been an avowed anarchist—though again like him, one devoted to personal freedom rather than political upheaval. But due to some regrettable mistake, it seemed, the engagement had gone wrong.

‘During several evenings as we sat looking out over the beaches, listening to the cries of the oyster-catchers and the sea eagles that circled above us in the darkness, feeling gloriously remote not only from Australia but from Europe and from our earlier lives, Brown propounded the theory of anarchism’, wrote Grant Watson. A Francophile, Rex also sought to emulate the cultural discernment of the French, compared to whom, he thought, the British were barbarians. But if Brown by now had nearly renounced the Anarchist doctrine, he leant instead towards socialism—although he perceived a danger in any movement that exalted the state above the individual:

The word seemed to lose itself in the quiet noises of the night. Here we were, far away from any meaning it might have. After a long interval, Brown said: “We have the Present, if only we could appreciate, and surely we can in a place like this.”

So it was, so long as we kept ourselves free from the human politics which stirred and crackled amongst the hospital staff.