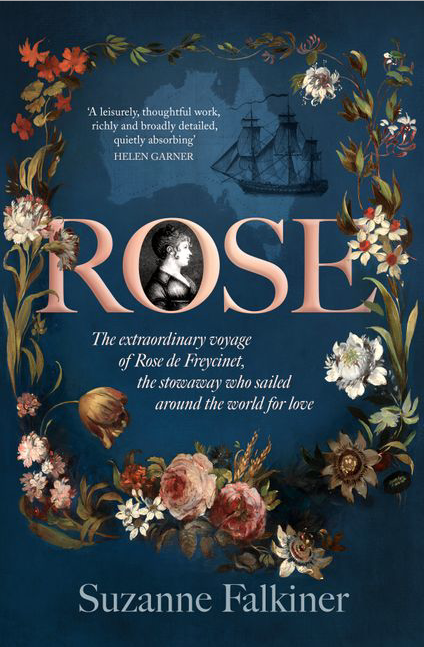 There is the novel, and there is history. Some have thought of fiction as history that might have happened, and history as fiction that did happen.

The Story of Rose and Louis de Freycinet

In mid-September 1818 a young Frenchwoman landed on a part of the Western Australian coast now known as Shark Bay, some 400 kilometres north of present-day Geraldton. After her husband’s matelots had carried her ashore from a longboat stranded on the sandbanks, 23-year-old Rose de Freycinet, in her empire-line gown and sunbonnet, perched on a rocky outcrop and dined on freshly-shucked oysters gathered nearby.

On reading this information on one of those instructive notice boards put up by the Parks and Wildlife people, I was struck by the incongruity of the scene. If the remote and arid landscape of Shark Bay appeared somewhat strange, and even unearthly, to me, I thought, how must it have seemed to a near-contemporary of Jane Austen, fresh from the crowded streets of the St Germain district in Paris?

Born during the French Revolution as the genteel daughter of a widowed and impoverished schoolmistress, Rose had left the classroom to marry Louis de Freycinet, a handsome naval officer fifteen years her senior. Not wishing to be separated from him when he embarked on a three-year scientific expedition to the South Seas, she had defied naval ordinances and smuggled herself aboard his ship in male clothing. Once their vessel had left French waters, Rose emerged to take her place as the captain’s wife.

Of Rose herself, little was known beyond that her maiden name was Pinon and that her mother’s first name was probably Jeanne. Her journal, first published in French in 1927, passed through the hands of several male editors who, to a certain extent, had bowdlerised it. Who was the real Rose? To find out, I would need to go back to the original handwritten French documents and letters.

‘A beautifully written, heart-lifting saga of adventure and romance’

The Shipwreck in the Falkland Islands

As the Uranie, now semi-submerged, resounded with savage and blasphemous songs and shouts to the primitive beat of a drum, Rose cowered in her cabin. The crew’s demeanour in the face of death seemed to her both incomprehensible and wicked, and while Rose was afraid for the men, she was also afraid of them.

Jacques Arago, the ship’s artist, did not forget Rose at this moment. Now it was 1.00 am, and the stillness continued. Sad, suffering, but calm and resigned, she piously awaited death, he wrote: ‘She prayed, but without weakness; she wept, but without cowardice.’

When the holds began to flood, the ship’s biscuit had been brought up to the poop, the highest and driest point on the ship. As the sodden boxes were thrown roughly into the main cabin, Rose stacked them with ‘religious care’. Occasionally she appeared at her small window, searching the seamen’s faces as they passed back and forth. What would await her if she were to survive without her husband? Frightened was she was by the sailors’ coarse and frenetic oaths, Arago was able to reassure her: ‘they speak of you; they ask about you — you have nothing to fear from them, now or ever.’ Recreating the events in his memory many years later, he recalled their conversation.

I came into the little stateroom: “Well,” she said to me. “No hope left?”

“Hope, Madame, is the sole asset that we lose with our last breath!”

“But these hideous songs!”

“They think you don’t understand them.”

“One can guess at their impiety.”

“What you call impiety, Madame, is bravado!”

“So you approve of them?”

“I do more: I imitate them; I spur them on; I improvise and try to inspire them — they follow my words. With calm, we should all die; with this energy we shall be saved.”

“Let us put our trust in the Holy Virgin!”

Night had fallen, sombre and silent. At each instant, we plunged into the abyss.

Rose had observed without trembling the torches and lanterns burning beside open barrels of gunpowder, and forgot her own misfortune in the general disaster, he wrote. Madame Freycinet was a truly courageous woman.

‘Today has been very eventful and now I am free to have a long talk with you’, wrote Rose to in her journal for Caroline on 14 March. ‘All the camp is asleep except the sentinel, who has just turned his hourglass and is sounding midnight before putting himself to bed. The only sound that disturbs me, and which will unsettle me for a long time, is that of the waves breaking on the rocks, a short distance from our tent. Then, when this furious sea holds back for a moment, my attention is drawn to the bubbling of a chicken quarter, cooking beside me on the table where I write by the warmth of my lamp, to make broth for my poor Louis. Weary of soup from stock tablets, I decided this evening to kill one of my five or six chickens saved from the wreck, which I have carefully kept back for an occasion such as this.’

Louis had passed a quieter night last night, she continued, despite being in almost continuous pain. A strong dose of opium had brought him enough respite, if not to sleep, at least to rest. Seeing that he was a little better, and weary herself after a wakeful night, Rose had made herself a bed of two chairs, a plank, and a long cushion as a mattress, and slept well. Her thick cotton Japanese-style kimono was wondrously warm: when she went to bed fully dressed and wrapped in this, she did not feel the cold at all. The calm from the opium had lasted all day, but Louis was extremely weak, having drunk only a little broth over two days.

….That day, too, a plank had been dredged up from almost directly beneath the corvette, and proved to be the one loosened when the Uranie had struck the pinnacle. With a seven-foot gash in it, the sailors found it miraculous that they had reached the beach without sinking. Now Rose was even more thankful to be on firm ground, she told Caroline: ‘May God protect our return, and my gratitude will be boundless if He allows me to embrace once more my mother and my friend.’