RAIN IN THE DISTANCE 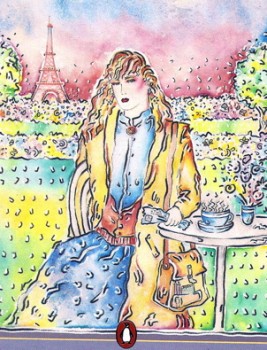 Rain in the Distance

RAIN IN THE DISTANCE

There is a point early in Rain in the Distance where you sense you have stumbled on something extraordinary. Suzanne Falkiner has a high, Alpine intelligence. As a reader, you find yourself eager to accompany her because she has the dispassionate authority of one whose conclusions follow long, silent observation. The structures she builds as a writer are neat and handsomely crafted, but when one senses something moving within them, forces as finely weighed and balanced as the words themselves, the pages acquire a dramatic resonance.

A spare, acute autobiography by a restless Australian…Suzanne Falkiner, whose fourth work of nonfiction this is, manages recalcitrant material with precision and grace.

6.30 AM. The thin, cold electric light in the stables in winter. Leading horses out of the darkness and slapping on heavy leather, snorting. Wet outside and cold. The oilskins of the men rustling. I stand under the light among the horses crowded in out of the rain, saddling my wet horse. The stable is brown cavern in the blackness, the voices quiet. There is the smell of wet horse hair. My horse rears and pulls back, reins dangling. The smell of manure. We rub the saddles dry with a filthy, greasy towel; the wind blows the saddlecloths off the horses’ backs; there is drizzle on the tin roof.

Riding into a curtain of wind and drizzle. Saddle clammy between my legs and water running down my face. Reins wet and difficult to grip-it is getting lighter, but rain still falls slowly out of the grey sky. Hooves sliding in the mud, making round holes that fill with brown water behind us.

One of the men throwing his head back and laughing at the rain. Drops of water falling off his hat and legs thrust forward in the stirrups. Horses chewing the bits and snaking the water off their manes. Five horses walking in line. Cold grey sky and sodden grass meeting a line of blowing trees. We are three miles out before the sun emerges.

At midday the cattle flow through the yellow grass in a jolting stream, across bore drains, red and white against the yellow. In twos and threes they trot in from the corners of the big paddocks to join the mob. And then the stragglers must be chased from under the scrubby trees and from the creek beds.

And, riding the grey horse, I stop for a moment, in the creek bed, in the sudden cold shade. Cracked grey mud, and again the brown and mauve mussel shells. Dead gum leaves with a peculiar crackle and the dehydrated skeletons of branches and trees. Small pools of milky tan water, footprints of birds delicately preserved in the smooth-textured mud. There is only the sucking and blowing noise of the drinking horse. So still, for the occasional screech of a galah, that the droplets of water falling from its mouth resound. And then the crackling of twigs as I guide the horse back up the bank.

In the yards the cattle bellow. The station children try to light a fire for the branding, with wet grass and twigs in a hollow of wilga logs and blown umbrella grass, while the horses stand with their reins trailing around them. Eventually there is a flame in a blackened temple of sticks, furnace hot on one side and cold on the other. While the men work, we scorch stale sandwiches on the ends of pointed twigs in the flame. Until we are posted by the men, with flapping chaff bags at gates to block the bawling cows, and none of us has the courage to show fear as the beasts, higher than our heads, prop and snort in the gaps.

PARIS. TOWARDS THE END. I locked the double lock on my door with both keys. Behind the thick door my tiny room waited for my return in the moonlight that floods through the sparse curtains of the french windows. The room was not big enough for more than one person to be in it comfortably; I was usually there alone.

My feet clattered on the bare boards of the corridor, past the French girl’s room, past the Greek’s, the empty room, to the back staircase. I hardly noticed the seven flights of stairs.

At the bottom I pushed through the fire-escape door into the marble and mirrors of the front part of the building. Check the concierge’s door for messages. There were none. Outside, the Boulevard du Montparnasse was already busy, the cafes filling with the early evening crowd. Outside Le Dôme I descended into the Métro, reaching automatically into my bag for the yellow cardboard ticket. The train roared in, doors slid, those inside transferred themselves to the platform, those outside surged in the compartment. Standing, I checked my reflection in the glass. I looked all right, but nervous. I changed at Odéon. At Cardinal Lemoine, I threw the rolled-up ticket into the plastic litter-bin on the wall and ascended the steps to the surface.

It was darker now. An empty part of town, just here. I head up the hill towards the Rue Descartes. Eight-twenty. I was due at Antonio’s at eight-thirty. Hurrying too much, I was nerve and jumpy. I slowed down and glanced into the little restaurants as I passed. The boys behind the tables on which the mussels and oysters were displayed half-heartedly tried to entice me in. They thought I was an American tourist. Down the Rue Mouffetarde. Left. Into the courtyard. A cat raced away into corner. Up the dark steps, third floor. A different apartment. I only been here once before. And then I hesitated before I pressed the bell…

He had a telephone and I did not. I had to telephone him when I wanted to see him. In the bar of the Select, in the stuffy cubicle next to the men’s toilets, with little brass jetons. Every week, from the weekend until about Wednesday, my unwillingness to reaffirm openly that I wanted to see him battled with my need to see him, until by Thursday or Friday the latter would finally win. After the first time I telephoned with an icy calm that masked the fact that my hands were shaking. I would imagine the telephone ringing through the dim flat; Antonio getting up from the desk or coming out from the kitchen, picking up the receiver. But he always sounded glad to hear me, his voice was friendly, he told me he had been hoping I would ring. Some casual conversation, then we would make a time and place to meet. I would hang up with a feeling of relief.

‘In New York,’ he told me once when I was in his bed, ‘I happened to sleep with a cousin of mine. She was very beautiful. She came from out of town and stayed in my apartment. I thought she was attractive, but, well, being cousins I thought it would be wrong to make love to her. Although I did find myself wondering if she was attracted to me as well.

‘She was sleeping in the living room, and in the middle of the night the telephone rang. I went out to answer it, she was awake, and while I was talking I reached out and held her hand. She was naked, and I watched her all the time I was having the conversation. After I hung up the telephone we made love. But I was worried all the time she would be upset. Afterwards she was lying beside me caressing me and I said, “You have beautiful skin.”

‘She said, “You have beautiful skin, too. So has your brother.” And I was worried.’

I laughed, as expected. But immediately I had an image of him, smiling at another woman across the room in the darkened flat, as he talked on the telephone to me.