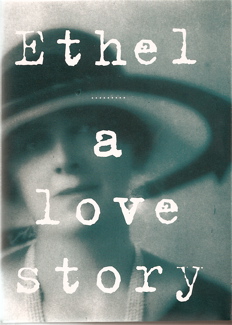 ‘THE MARRIAGE BED IS A KIND OF CONCENTRATION OF DANGEROUS PROPINQUITY. A CERTAIN PART OF EACH INDIVIDUAL LIFE MUST BE LIVED OUT ALONE.’

From the rich and shadowy interior of an old house overlooking Sydney harbour, a granddaughter recreates in her imagination the elusive story of the grandmother she never met: Ethel, a woman passionately involved in literature politics and love, but ultimately thwarted in all three. Unexpectedly, a world of dramatic secrets and almost forgotten scandal emerges from beneath a veneer of apparent propriety.

The book ultimately reveals a socialite of vacillating opinion, sometimes so frustratingly snobbish and narrow in her views one was often filled with a desire to hurl the book across the room. Then again, just as suddenly, one was shown—mostly via extracts from Ethel’s private writings or a friend’s anecdote—the spirit of a passionate woman whose frustrated artistic pretensions are both sad and achingly human; whose inner thoughts resound so authentically, they act as a mirror to reflect so our own collective shortcomings and yearnings.

Falkiner disconcerts by adopting the fashionable conceit that all writers are liars. Biographies, by a necessary selection of facts, may be called ‘lies’. But novels do not lie. Novels have no need to lie. Having other purposes, a novel can effortlessly, even unconsciously, hold the truth in its shadows.

In the course of her search for Ethel, Falkiner goes to see Patrick White. The Whites were neighbours at Tokay, and the child Patrick, as a companion of the children, was a frequent visitor. Yes, he said, he remembered Ethel. She had talked to him about poetry and he had used her sitting room at Tokay in The Vivisector.

Suzanne Falkiner rereads the novel and finds no marked resemblance to Ethel’s sitting room. She does not say whether she finds a resemblance to Ethel herself, but anyone familiar with Patrick White’s novels will find it credible that Ethel’s life contributed to those scenes, recurrent in his work, of feminine pretension brought down by sexual humiliation. For, if novels never find it necessary to lie, novelists sometimes, mercifully, do.

Everywhere in the silent house there were books and clocks: antique English clocks on the white marble mantelpieces, a blue and crystal Art-Deco glass clock on an inlaid table, a gentleman’s pocket watch mounted on a stand fashioned from a silver-plated stirrup, enamel travelling clocks in worn leather cases beside the beds, and, behind the heavy door leading through to the butler’s pantry and the kitchen and servants’ quarters, a large wooden kitchen mantel clock with a pendulum and chains. Most of them did not work, or now were never wound.

The books were mainly confined to the polished wooden bookshelves that lined the sitting room, and behind the tall glass doors of the walnut desk, although upstairs every bedside table had its pair of book ends holding a selection of modern novels. The paintings that crowded the walls were mainly moody watercolours of landscapes or large, imposing oils hung just a little above eyelevel.

Ethel died in her pale-blue bedroom, where the ornate fireplace of milky Florentine marble was inlaid with hand-painted tiles depicting the figures of Spring and Autumn, and where the heavy, leather-bound Webster’s dictionary was kept on a shelf beside her bed. She was found one morning lying face down on the polished mahogany four-poster—not, as might be expected, by the housekeeper, but by a local plumber summoned by the housekeeper, but by a local plumber summoned by the Rose Bay police. The door to her room had been locked and further secured by one of the heavy bolts that were built into all the internal doors. The Daily Mirror of 11 October 1946, which reported these details, also noted that ‘a diamond ring valued at several thousand pounds’ had been removed from her finger after her death, which was assumed to have occurred the night before.

I particularly remember the leather-bound dictionary, which in my early childhood still had its place in one of the nooks and crannies built into the head of the four-poster bed where my mother now slept. I would pull it out when I was climbing among the loose pages of the Sydney Morning Herald and the Daily Telegraph, which the butler Sid always brought to my mother’s bed along with her breakfast tray. My father always spread the newspapers haphazardly all over the blue linen sheets when he had come in from his adjoining room during the night and we discovered him there in the morning. My mother and father would talk and receive phone calls while they ate from the trays that Sid brought, each with its silver rack of crustless, thin, dry toast; covered plates of bacon and scrambled eggs with a watery fried tomato; a little silver pot of tea with its accompanying water pot; and miniature silver dishes of butter and marmalade. These voluptuous city mornings represented the rare occasions when my mother and father and we three children were all together in the same place, let alone in any physical intimacy.

My mother would generally be in a good mood, and I would be happy. The bed was interesting territory: there were my father’s lengthy conversations on the heavy black bakelite telephone to listen to; beside the bed were the address books and letters and papers on the rather incongruous modern aluminium traymobile that acted as a sort of portable office, and on one occasion I discovered a Colt revolver under the pillows. The gun was in a plastic bag so as not to leave oil on the linen pillowcases, and it was licensed by the Rose Bay police. (This was a precaution against prowlers, my mother told me, annoyed at my discovery. Usually it was kept in the safe, although why she thought the prowlers might come on that particular night I did not think to ask.)

Before I was able to read, I would lug the big dictionary onto the bed—it was nearly as thick as it was wide, and almost too heavy to lift—and look at the creamy colour plates, which showed ‘Flags of the World’, ‘Military Decorations of the British Empire’ and ‘Precious Stones of the World’. The flags and decorations were shown in miniature, while the stones were magnified. As a result, for a long time I thought that diamonds, rubies, sapphires, emeralds and topaz were commonly the size of tombola marbles, or those striped, translucent boiled sweets that come in screw-top glass jars. I had the same problem with the paintings in my father’s copies of National Geographic, so that in my dreams of a luminous, coral-encrusted world beneath the sea there were lobsters and crabs the size of a man, seaweed and sea anemones as big as trees.

But, now that I think about it, the incident with the gun must have occurred after the death of my father, Ethel’s eldest son, when everything seemed changed in my life, although many of the externals remained the same.

I did not know then that Ethel had died in this room. I was vaguely aware that the ornate silver-backed brushes and combs had once belonged to my grandmother, along with the silver encased crystal scent and smelling-salt bottles and the silver mascara box with its little sooty dried-out brush inside (which had by then found its way into the cavernous green spare bedroom that I shared with my sister when we left the nursery). My mother’s mascara, I knew, came in a metallic gold tube from Revlon.

My grandmother’s bedroom, which contained a walk-in closet rather than the immense, old-fashioned wooden wardrobes of the other bedrooms, had room for two dressing tables. One was of polished silky oak with an oval mirror and many little drawers where my mother kept bits and pieces of costume jewellery, which I would sometimes secretly inspect while she was away, which was often. The other had striped satin curtains to disguise the fact that it was actually a large Chubb office safe-another legacy of Ethel’s designs to foil burglars. This was where my mother kept her real jewellery and ‘important documents’, which years later would reveal themselves to be a collection of old appointment diaries, some letters from my father, and our christening certificates. The photographs my mother had slid under the glass covering the top of the genuine dressing table were not photographs of us, but of her show jumpers and herself receiving ribbons, and one of her with a marlin she had caught in the Gulf of Mexico on her honeymoon, and another taken in Hawaii, where she was standing smiling in a tightly wrapped, flowered sarong, leaning back against a tropical veranda. There was also a photograph of my mother and father on their return to Australia after their marriage, sunbaking at Palm Beach, snapped by a photographer from the social pages. There were no wedding photos, probably because my father—who, according to family legend, had summoned my mother to the Dorchester Hotel in London to marry him after a midnight quarrel on the telephone-had forgotten to arrange a photographer.